At Precision Quincy, we have the privilege of working with customers at the vanguard of innovation in manufacturing. We design and fabricate industrial ovens for applications that run the gamut: from working with cutting edge alloys and composite materials, to leveraging 3D printing and other additive manufacturing techniques, to utilizing the technologies underlying buzz words like Industry 4.0 and the Internet of Things (IoT).

We love working with innovative customers because designing, engineering, and manufacturing great products is at the core of our company culture.

Why Manufacture in Space?

Manufacturing in space will be needed to establish space stations, colonize the Moon and Mars, and support deep space exploration. It will also create opportunities to profit from untapped resources and has the potential to benefit those of us who remain on Earth.

Space Capital reported that $12.1 billion was invested in private, non-public space companies in Q1 and Q2 of 2020, with $303 million allocated to early-stage investments.

Private investment in space has been led by high profile entrepreneurs like Elon Musk, CEO of SpaceX, who wants to establish a colony on Mars, and Jeff Bezos, founder of Blue Origin, who has predicted that all heavy industry will be moved off planet, with Earth remaining zoned for residential and light industrial use.

Opportunities to Innovate in Space Manufacturing

We do not believe that innovation comes from bureaucratic funding, traditional university coursework, or consultants, but from technicians and entrepreneurs who tinker and suffer setbacks in solving real world problems.

For this reason, we wanted to summarize some recent innovations that may trigger ideas for customers who share our passion for technology and innovation.

Factories with Microgravity and Ultrahigh Vacuum

In space, microgravity lets materials grow without walls, and it allows them to mix evenly and hold together without traditional supports. Ultrahigh vacuums help things form without impurities. These features of the space environment will create opportunities for exotic alloys, protein crystals, pharmaceuticals, and other products.

An example of manufacturing in a microgravity environment can be found today with a special type of fiber-optic cable called ZBLAN. When manufactured in microgravity, the thin cable is less likely to develop tiny crystals that increase signal loss.

When built without those flaws, the cable can be orders of magnitude better at transmitting light over long distances for applications such as telecommunications, lasers, and high-speed internet.

Space creates an opportunity to access the power of the sun more efficiently. The sun produces ten trillion times more energy than what is currently used today. There are many advantages to generating solar energy in space. One benefit is that a space-based solar power station could orbit to face the Sun twenty-four hours a day.

The Earth’s atmosphere also absorbs and reflects some of the Sun’s light, so solar cells above the atmosphere will receive more sunlight and produce more energy. The Earth will need more energy. If the trend continues to electric power, it will require a heavier power grid, which would be an enormous challenge.

Although breakthroughs in technology are needed, there is an opportunity for a small number of space-based solar power satellites to make a significant contribution to the clean energy mix.

Mining Asteroids, the Moon, and Mars

Asteroids and the moon contain many resources that could be used to build space stations and in-space manufacturing facilities. They also contain metallic ores that could be mined and made into tools and parts for spacecraft.

Rare earth elements, which are increasingly hard to find on Earth and used for products such as semiconducting electronics, can be found on asteroids. Asteroids, the moon, and Mars also hold water ice which could be used to make rocket fuel once it is separated into hydrogen and oxygen.

Space shipyards will be used to build ships for flights to the Moon or Mars and robotic mining ships to asteroids.

Lunar liquid oxygen (LUNOX), hydrogen from lunar polar ices or silane, raw regolith for mass driver propulsion, sodium and perhaps magnesium for ion drives could be used to fuel ships. There would be plenty of lunar aluminum, magnesium and titanium alloys to build these ships.

Long-duration exploration missions will require a shift in the design and manufacturing of space architectures. The ability to perform in-space manufacturing will move us closer to sustainable, flexible missions (both in-transit and on-surface) through on-demand fabrication, repair, and recycling capabilities for critical systems, habitats, and mission logistics and maintenance.

These capabilities provide tangible cost savings due to reducing launch mass, as well as significant risk reduction due to decreasing dependence on spares and/or over-designing systems for reliability.

The International Space Station already has 3D printers which were used to produce tools on the space station. In the future, larger scale structures, like telescopes or solar panels, could be printed in space instead of being folded up to launch into orbit.

Colonies on Mars could be built using locally available resources to print shelters and other components. The settlers would only need to travel with the digital blueprints. Building in space will require a better understanding of how materials react to space’s atmosphere and how to procure these materials in-space.

Due to speed of light constraints on communication, manufacturing in space at a distant point of resource acquisition would benefit from autonomous robots used to perform the labor.

Even with autonomous robots, people will still be needed to perform tasks that require human intelligence and flexibility. For human crews, consideration would need to be given to habitat and safety concerns.

The availability and favorable physical properties of metals will make them a major component of space manufacturing. The production of hardened steel in space will introduce some new factors.

Carbon only appears in small proportions in lunar surface materials and will need to be delivered from elsewhere. Waste materials carried by humans from the Earth is one possible source, as are comets. The water normally used to quench steel will also be in short supply and require strong agitation.

Casting steel can be a difficult process in microgravity, requiring special heating and injection processes, or spin forming. Heating can be performed using sunlight combined with electrical heaters. The casting process would also need to be managed to avoid the formation of voids as the steel cools and shrinks.

The pace of progress in space manufacturing will be supported by other innovations, including decentralized computing, additive manufacturing, automation and robotics, advances in material science, lean methodology, artificial intelligence, and everything in-between.

As the cost of sending things to space continues to decrease, the pace at which tinkerers and entrepreneurs will innovate will accelerate resulting in out-of-this-world breakthroughs. 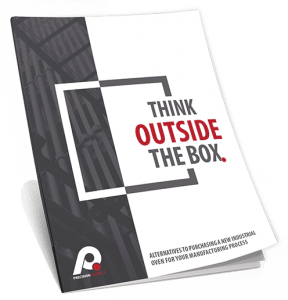 Just email us or send us a message (at right). Please allow for up to 48 business hours to receive a reply.

You can also call our industrial oven repair and parts department any time at: 815-222-9461